It was bitterly cold in Delhi in February of 2009, when we boarded the flight and landed almost half a day later, in Sydney, in the middle of an unusually hot Aussie summer. As the aircraft circled and descended, we were welcomed by a spectacular sight.  It was a clear day and I have always believed that landing into Sydney airport is as wonderful as it gets.

I was looking forward to my new assignment as Consul General in Sydney with additional charge of South Australia. Consulates deal with trade and investment, providing consular services and soft power diplomacy. As the bilateral relationship was dormant, Sydney promised to be a relaxed assignment. I was so wrong!

As things unfolded, 2009 turned out to be a dramatic year in the India-Australia tapestry. Some might argue that it was a bad year in the relationship but, even as the year limped along with all its tragedy and confusion, I believe it heralded a significant  and positive turning point in the bilateral framework.

It was, in fact, the year in which ‘attacks on Indian students’ was the only subject under discussion in the media, parliaments and foreign offices of both countries, and, indeed, between friends and strangers. So severe was the shock and horror in India that I have heard it said that Australian tourists visiting India were reticent to disclose their nationality because, if they did, they would immediately and invariably be asked, ‘Why do Australians love to hate Indians?’. Such was the media hype in India. Indian television channels had a field day out-doing each other through venomous anti-Australia rhetoric, including allegations of racism.

Sadly, attacks did, in fact, take place. Victoria, especially the city of Melbourne, was the worst affected. That some of the attacks were clearly racist in nature is also a fact. At the same time, in the provinces of New South Wales and in South Australia, the situation was far better contained because the leadership they demonstrated was proactive, sensitive, inclusive and decisive. I owe a debt of deep gratitude to persons, like Nathan Rees, Kristina Keneally and Barry O’Farrell, who were Premiers at NSW, Mike Rann, who was Premier in South Australia, and many others, such as, Stepan Kerkasharian Chair of the NSW Multicultural Commission, Robert Redfern Superintendent of Police at Paramatta, Tony Issa Mayor of Paramatta, to name a few. They were visionary and far-sighted in the way they saw the situation and responded. They were the quintessential crisis managers.

But this is not a story about them. Rather it is a about people, who reached out. Complete strangers. Children. Adults. Communities. Australia is multi-cultural, they taught me, because her strength lies in embracing diversity and that what was happening was a terrible aberration.

Let me tell you about three persons and incidents that touched my heart during those troubling days.

My inbox would be flooded every day and since I personally respond, my mornings were devoted to letter-writing. One day, Ann, my Social Secretary, brought me a hand-written letter. It was on blue letter paper and while the envelope was clipped to it, there was no forwarding address on it or in the letter. All I could make out from the postal stamp was that it came from St. Ives.

My parents told me that I could write to you and let you know how I feel.

We keep seeing on the television news about attacks on Indian students. We discussed it over dinner last night because a number of my friends are Indian.

I am truly sorry at what has been happening but would like you to know that not all Australians are like the ones, who carried out these attacks. I am not. Nor are my parents or my sister, Claudie. I love my friends and will continue to love them.

I am praying that these attacks will stop soon.

With hope and good wishes,

PS: I am eleven years old.

Kevin’s letter had a deep impact on me. An eleven-year old lad had just taught me in the most simple and powerful way how it is so easy for us to fall prey to misperceptions and to type-cast people.

My friend and colleague from the Consulate, Gautam Roy, and I visited Wollongong and Newcastle. Indian students were studying at the Universities in both cities and there were also Indian-origin Faculty members. Stray incidents of taunting and abuse had been reported but none of any attacks, mercifully. The atmosphere had become such that even a minor incident was blown out of proportion and there were always people ready to give statements to the Indian television channels simply to get a minute of ‘fame’ and coverage, just to prove how ‘involved and informed’ they were. It was disgusting.

I ended up visiting the two Universities of several times. I gifted over a hundred books to each of the University libraries to create an ‘India section’. Ceremonies took place to mark the gifting. I gave talks and interacted with students and Faculty.

The University of Newcastle organized a wonderful exhibition on Mahatma Gandhi that was open to the public and had sell-out attendance. The University of Wollongong, similarly, had a wonderful book-gifting programme. Events such as these put a strong and positive focus on India. It was also a way of rallying people around to condemn the ‘attacks’ and extend support to international students and to make them feel welcome.

While interacting with the students and Faculty, who were from India or of Indian origin, from these universities, a feedback that was consistently received was that they were afraid of going out and feared attacks. Consequently, they tended to band together. Creating mini-India’s in either of the two cities, which were, in any case, small by comparison, appeared to be such a wrong approach. It would only perpetuate the divide rather than dispel it.

A conversation occurred during the Gandhi exhibition that transformed the narrative. I met the wonderful Bob Stuart. Cherubic, portly, possibly in the latter half of seventy years of age, Bob had a ready smile and a big heart. I took to him instantly and indeed, to his wife and daughter. He told me about his group of senior citizen friends, who would meet up every Monday over beer and barbeque and called themselves, he said with a big laugh, ‘the Monday Desperates’. Would I join them for the BBQ? I was heading back to Sydney that evening and had to decline but enquired if he felt Indian students could be invited to the BBQ. He readily agreed with a ‘Why not? Good idea!’ I said there was one condition that I would like to propose. Each Indian student or Indian invitee would need to bring along a non-Indian friend.

That was the how the BBQ get-togethers with Indians in Newcastle started. Often they would bring along home-cooked food and it became a time of bonding and of sharing. During my subsequent visits, I saw an extraordinary transformation in the way the Indian community was feeling. A sense of confidence and belonging had grown.

I always believed that simple ideas can be pretty powerful and even move mountains. I realized that was only part of the story. Ideas are important but it was Bob and his friends, who had moved the mountains. Ideas that are not implemented remain stuck on the drawing board. They do not add value.

Things started to settle down somewhat, after the first quarter of 2010. The Indian television anchors lost interest, which was a big relief.

Through 2009 and the early part of 2010, there was a flurry of activity that involved bilateral consultations, media visits, and those by official delegations. A series of policy interventions and policy reforms in Australia, particularly in the education and immigration sector helped regulate the market better. This was combined with significantly higher level of security and consultations with students and the resident community. Each of these helped bring back confidence.

It was a pretty intense period I must confess but an extraordinary experience in a wonderful way! To contribute to an effective and sustainable solution is, perhaps, the best opportunity one can hope for. I have said during my tenure that the ‘attacks’ became a significant and positive turning point in the relationship. There was heightened interaction and a genuine desire by both governments to find ways of engaging across a whole host of areas.

The ambience that existed was simply too good to ignore!  In 2010, UNSW Sydney and University of Adelaide agreed to install a bust of Mahatma Gandhi in their campuses.  I saw this as a great symbol of a time that was, the lessons we learnt and promise never to forget.

During my tenure in Sydney, I would often visit the library lawns at UNSW to sit by the bust. One evening, it delighted me to see a number of Korean students posing with the bust. Some had their arms around Gandhi’s shoulders. He would have liked that because all that he stood for is so integral to the very purpose of education and the integrity of the human civilization. 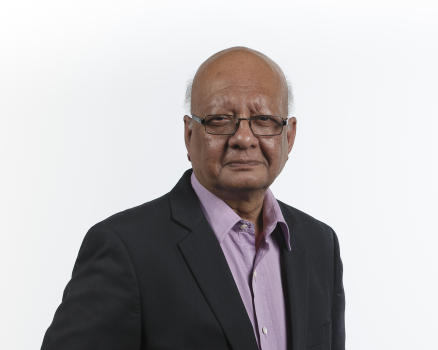 Amit Dasgupta was the Inaugural India Country Director for the University of New South Wales, Sydney for four years since 2016. Thereafter, he was appointed Strategic Advisor for the University on its India engagement programme. Prior to that and following his retirement from the Indian diplomatic service, he was appointed the first Head of the Mumbai Campus of the prestigious business school, SP Jain School of Global Management, where he was not only the Administrative Head of Campus but also part of the School’s Faculty.

He has a B.Com degree from St. Xavier’s College [Calcutta University], an MA and an M Phil in Sociology from the Jawaharlal Nehru University in Delhi. He was the recipient of the Government of India’s National Merit Scholarship and did a two-year affiliation with the Department of Sociology, McGill University, Canada, as a Commonwealth Fellow. He attended an Executive Development Programme at the Indian School of Business, Hyderabad.

During his diplomatic career, which he joined in 1979, Amit served in various capacities in India and abroad, such as, Cairo, Brussels, Kathmandu, Berlin, Sydney and Manila. He was Ambassador to the Philippines, with concurrent accreditation to the Republics of Palau, the Marshall Islands, and Micronesia.

A published author, Amit’s latest edited book is The Phoenix Rises: Lockdown Chronicles [Wisdom Tree]. He has a number of others books to his credit, the most recent ones being The House and other stories [Yoda Press],  Lessons from Ruslana: In Search of Transformative Thinking [Harper Collins],  The Strategic Shape of the World [Sage], India for a Billion reasons [Wisdom Tree[, The Divine Peacock [Wiley], The Perennial Tree [Wiley], Indian by Choice [Wisdom Tree], The Lost Fragrance [Wisdom Tree]  and others.

He has also been published in academic journals, civil society magazines and newspapers on matters related to foreign/security policy, management and leadership issues, and on education and government policy. He speaks and lectures regularly on the above subjects.

In 2013, the Multicultural Commission of the New South Wales government in Australia awarded him the gold medal in recognition of his contribution, during his tenure as the Indian Consul General, in promoting multiculturalism and harmony. He is a Distinguished Fellow of the Australia-India Institute and a Senior Fellow at the Society for Policy Studies.

He is married and lives with his wife in Noida, India.