‘You can put your dead things on the table there –’ our hostess pointed to the fold-out table under the Japanese maple. ‘I don’t allow dead things in the house. I’m vegetarian, remember?’

‘Um, this is actually a potato and chickpea salad. I didn’t bring any meat for the barbeque, if that’s what you mean. It’s too hot.’

‘What an extraordinary idea’ said our hostess, dragging deep on her cigarette before throwing it, still smouldering, on the brown grass under our feet. ‘You people don’t eat dead things when it’s hot? But you eat curry, right?’ Her voice was 1920s flapper-girl, smoky music-hall, all rumbles of laughter and rolling vowels and she waved her arms about and patted the pockets of her smock for another cigarette. I put my foot out and squished the earlier one.

‘Kathy,’ I said, pointing at the dead stub. ‘How long have you been in Australia again? Long enough to know only pyromaniacs smoke on a 42-degree day. And your hubby a firefighter – poor thing.’

Kathy grinned and lit another cigarette before pushing the potbellied Weber towards a paperbark. I helped trundle the barbeque over to a spot under the tree and waved away the smoke she blew. She linked arms with me and planted a smoky kiss on my cheek. ‘Look at this place, would it be such a loss if it accidentally burned down? Ric,’ she called out before collapsing in a fit of coughing. She tried again – ‘Ric, our Perth friends are here.’

‘Hi Ric,’ I waved to the man on the verandah, and he crinkled his eyes before lifting a hand in an answering wave. We’d met at the day-care centre, six years ago. He had held the door open for me while I struggled with backpack, laptop, handbag and a squirming four-year-old. He followed me inside, holding a wriggly child of his own, a boy, who went still when our eyes met.

Ric owned a lawn mowing business and turned up every month to mow my undulating quarter acre block when he found me pushing a borrowed mower up the slope one afternoon when he arrived to cut next door’s grass. ‘Don’t you have a husband?’ he grinned, before insisting on finishing the job.

‘Sort of,’ I replied. ‘He grew up in a tiny flat in a big Indian city and finds the mysteries of lawn mowing a bit hard to grasp.’

‘But you don’t?’ he asked, nodding towards the window where we could both see the outline of my soon-to-be-ex-husband wreathed in cigarette smoke.

When he and Kathy moved to the country, I promised I’d visit. So here I was, newly single, shared-custody daughter in tow, in the middle of a West Australian heat wave in March, with flies and crackling grass, a pyromaniac hostess and a solemn Greek god.

‘Mum, when are we going home?’ Ten-year-old Anita tugged my hand and squinted up. Her hair stuck to her scalp in wet ringlets and dribbles of sweat snaked their way down the sides of her face. I bent down and she whispered, ‘I don’t like Jonathon. He’s weird.’

‘What’s he done now? You must be patient with him. He’s younger than you.’

‘He wants to hide. There’s nowhere to hide here –’ Anita waved her arm at the flat block with its straggly trees and squat homestead. ‘And he won’t let me into his room.’

‘Ric,’ shouted Kathy again. ‘Your son is being a pain. Do something. He’s freaking out the little girl.’ She dragged on her cigarette and threw it down. I squashed it and shook my head at her. I moved the Weber away from the trees and back on the verandah, to the shady side.

Tom and Jan and their two kids, also from Perth, emerged from their air-conditioned Nissan and gasped, calling out, ‘Is it always this hot here?’

‘Yep,’ Kathy said. ‘Dead things for the barbeque over that way. Rabbit food, here, on this table.’

I reached into the melting Esky, pulled out a bottle of water and offered it to my daughter.

‘Have a drink,’ I said. ‘You’ll feel better. We just got here. We’re having a barbeque.’

‘Great.’ Her fierce glare indicated that she would Make Me Pay. She threw down the hat she held in her right hand and stamped on it.

‘Come here, darling,’ Kathy said from behind us, holding an arm out towards Anita. ‘Geez, you’re so pretty. And isn’t it horrible here? All this heat. I can’t stand it. Come on, let’s go inside and find you a ribbon, eh?’

Jonathon hurtled towards his mother in a cloud of brown dust. ‘Eat,’ he said. ‘Eat.’

‘Shoo,’ Kathy said. ‘Go to your father,’ and taking my daughter by the hand, led her towards the house.

I turned to Jonathon. ‘What would you like to eat? Can I make you a burger?’

‘I’ll get you a burger and a drink, okay?’ He wrapped his hands around my waist, his face in my belly for a few seconds before he pushed at me and ran away.

‘Well, that’s a first,’ Ric strolled over and flopped down into the camp chair beside the table where all the salads except mine were wilting rapidly. ‘He doesn’t like touching people. It’s hard for Kathy and I feel responsible – because – you know – there’s a few …’ he tapped his head, ‘in my family. On Kathy’s side there’s rocket scientists and other brainiacs.’

‘It’s easier here, you know, small town, less people to worry about and country folk are supposed to be strange anyway. And he gets much more attention at school. They have an assistant just for him. He’s improving every day. But what am I telling you all this for? You must come across kids like him all the time, being a teacher and all? My theory is we waited too long – we were in our forties when we had Jonny, not like you young things. By the time you get to my age your little one will be having little ones of her own, hey?’

‘I don’t suppose you get a sea breeze here, do you? How can you stand it? You lived by the ocean in Perth,’ I said.

‘Oh, it’s not bad. You’re much more part of the community here. You can’t live on the fringes. You have to be involved. I’m on call 24/7 and Kath volunteers in the old folks’ home. She used to be a nurse in England.’ He plunged his hand into the same Esky I had fished around in for bottled water earlier and held up a dripping bottle of wine. ‘Western Australia’s finest,’ he said. ‘Shall we?’ He uncorked a Goundrey’s and handed me a plastic Champagne flute, steadying my hand as he poured.

Kathy emerged from the house, cigarette in her left hand, right hand holding my daughter’s, face bent down towards her, music-hall laughter issuing from her throat.

‘Mrs Clark says I can have a sleep-over anytime. She says I can bring a girlfriend too. Jonathon has his own cave at the back of the house. It’s so cool.’ Anita’s face was animated again, her hair in a ponytail down her back, a variety of ribbons and clips cascading down, a drink in her hands and the glint back in her eyes.

Kathy threw her cigarette down and Ric stood up and squished it, urging her into the chair he vacated, handing her a plastic flute filled to the brim with wine. My daughter sat on my lap and I felt the heat of her body through the tank top she wore. I took off my hat and fanned us both. Ric murmured something about giving the lads a hand with the Weber and walked away.

‘Don’t you dare put your dead things on my good china plates,’ Kathy shouted after him. ‘Your son just destroyed my kitchen because I wouldn’t give him an ice-cream. There’s crap everywhere. You can clean up and clean your son while you’re at it.’

‘What’s wrong with Jonathon?’ asked Anita and I went still. I opened my mouth and Kathy shook her head and sipped her wine before smoothing my daughter’s hair off her face.

‘Your mum knows all the labels they use for children like him. But you know what, he’s just a right pain in the butt, like you – oh don’t look at me with your innocent eyes, miss – save it for the boys in high school when you get there. I know you give your mum a hard time. She loves you anyway. Jonny’s having a bad life at the moment, but it’ll get better. He knows I like to yell. I don’t mean anything by it. Now what have I done with those ciggies?’

The smell of charred meat drifted towards us from the verandah and the men cracked open cans of beer. ‘Oh, that smells nice,’ my daughter said. ‘I think I’ll go eat some dead things.’ 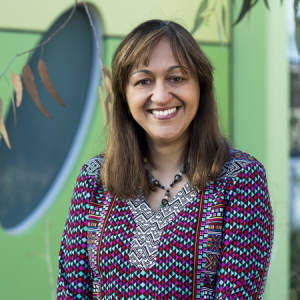 Rashida Murphy lives in Boorloo/Perth and is the author of the novel, The Historian’s Daughter. Her short stories, essays and poetry are available in several Australian and international anthologies. When not distracted by her cat she is trying to finish writing a new novel and a collection of short stories. More information can be found on her website rashidawritenow.com.